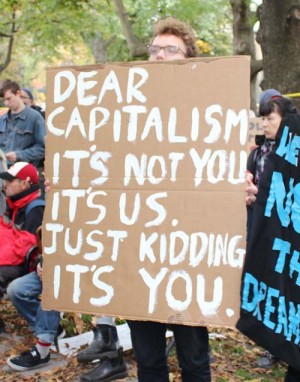 What I love most about the marches and rallies I attend is the uplifting sense of solidarity among people who, on the surface, seem to have nothing in common, but at the core share the same fundamental hope for a more just, more humane , more peaceful world.

Similarly, the Occupy Toronto demonstration was no different. On October 15, Toronto joined cities across the world, as thousands of people from all walks, with seemingly nothing in common, came out to lend their voices to one the most inspiring global movements I’ve ever witnessed. The message of the 99% was loud , and it was clear. Our current economic system that promotes the ruthless pursuit of profits at any cost, was leading to the death or our democracy, the dismantling of our social infrastructure and the destruction of our planet.

It was just earlier this year that the Arab Spring captured the attention of the world. After enduring decades of unspeakable brutality and unconscionable human rights violations, average, everyday people took to the streets in peaceful protest. From teenagers to grandmothers, from Egypt to Bahrain, these incredibly brave individuals endured, and in many cases continue to endure, violent attacks, arrests, torture and death at the hands of dictators who will clearly do whatever it takes to maintain their grip on power. 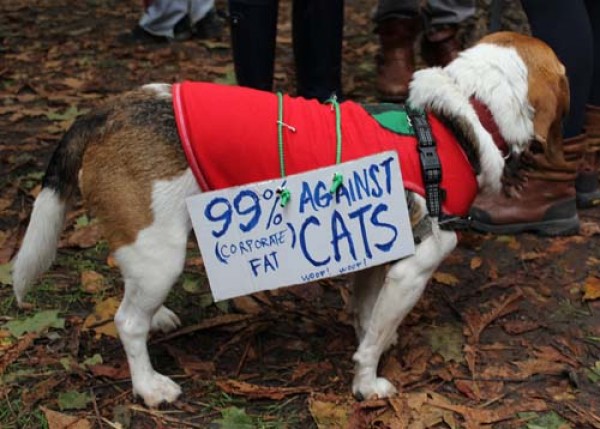 Fortunately, the struggles of the global Occupy movement are not exactly the same in severity or brutality, as those in the Middle East. However, the fight for democracy; one to establish it and the other to protect it, are identical. Increasingly our governments finance and protect the interests of corporations, rather than the interests of the people they are elected to serve. The Occupy movement aims to restore and revive the role of the citizenry in the democratic process. To quote Bridgette DePape, the inspirational young page, whose single act of civil disobedience made international headlines this past June, ” . . . politics should not be left to the politicians, and democracy is not just about marking a ballot every few years. It is about ensuring, with daily engagement and resistance, that the vision we have for our society is reflected in the decision-making of our government.”

As the global economic crises grows more dismal by the day, not only is the gap between the rich and the poor growing at an alarming rate, but the world’s once comfortable middle class is quickly joining the underclass. Worldwide, government austerity measures are making cuts to health care, education, pensions, social programs – the very foundations of civil society. 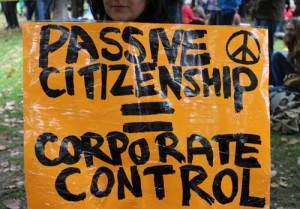 The Occupy movement understands that all this wasn’t an accident and it certainly wasn’t inevitable . The system was designed to hoard profits and exploit the most vulnerable. By the same token, the system can be re-designed to do just the opposite, to respect the rights and well-being of people and the health of the planet. It’s up to us, the 99%, to bring about the change we want to see in our society. It’s up to us, to be active and regular participants in our democracy and not take it for granted.

“Never doubt that a small group of thoughtful, committed, citizens can change the world. Indeed, it is the only thing that ever has” -Margaret Mead